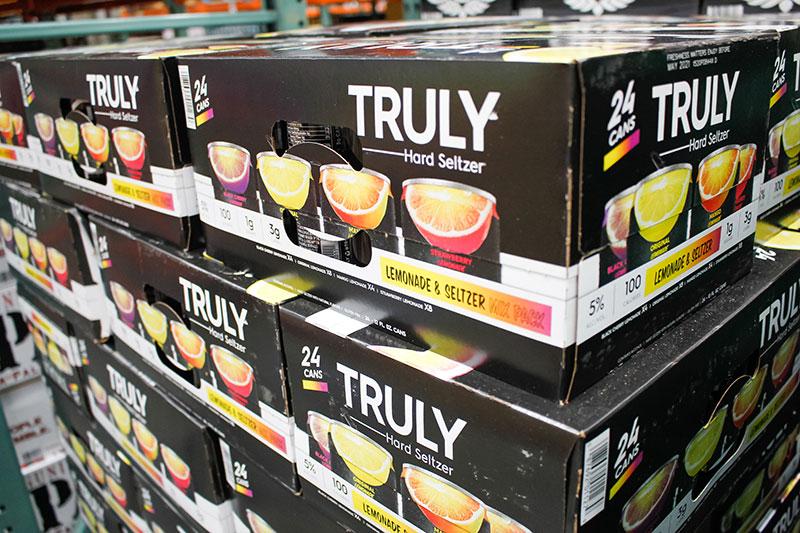 As reported via Beverage Industry, Boston Beer’s hard seltzer brand Truly has started construction on its first brick-and-mortar location in downtown Los Angeles. Called Truly LA, the taproom is set to open in early 2022.
The 8,000 square foot space promises to feature innovative flavors for the burgeoning hard seltzer category alongside a globally inspired food menu, with plans for an ongoing entertainment lineup featuring comedians, artists, and musicians, which will be livestreamed.
Truly is owned by The Boston Beer Co., and the new taproom will be adjacent to the Angel City Brewery, another Boston Beer brand. (Other Boston Beer brands include Samuel Adams, Dogfish Head, and Angry Orchard.)
While the concept of the taproom-as-entertainment space is not new, Truly’s anticipated opening is new in that its simultaneous in-person and online entertainment options point to a likely post-pandemic future that is rapidly materializing.
As competition mounts within the hard seltzer category, leading to further differentiation of attributes and flavors in an increasingly mature market Truly’s taproom concept will help in repositioning the category leader as an innovative, flavor-forward brand. As a serious challenger to established alcohol markets, hard seltzer sits at an interesting confluence of trends, with many younger adult consumers exploring new types of flavorful and functional alcohol options even as so-called “sober curious” consumers limit their alcohol consumption or eschew it entirely.
Examining the trend, the Hartman Retainer Services team has prepared a special white paper, Trend Spotlight: Sober Curious, that examines the evolving low/no-alcohol trend in consumer culture and the food and beverage market.
With regard to a post-pandemic horizon featuring simultaneous in-person and online entertainment options, Truly’s plans to feature such experiences promise increased visibility for both artists and the brand to broader national and global audiences and is in accordance with other predictions about how consumers will access live entertainment options in an increasingly digitally connected world, even after the pandemic.
Further Information:
Podcast: Sober Curious: What’s Behind the Trend Toward Low- and No-Alcohol Beverage Consumption?
Article: Trends Spotlight: Breaking Down the Sober Curious Movement in Alcohol Beverage Consumption
Blog: Has the Fizz Gone Out of the Hard Seltzer Market?