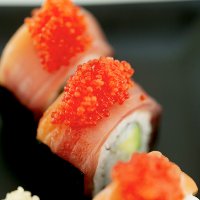 America’s love of bacon runs deep. It is fattier than Canadian bacon and smokier than English bangers. We lavish it with maple flavors and sprinkle it on salads, baked potatoes and, in recent years, doughnuts, cupcakes and chocolate. There are bacon candles, bacon perfume and bacon deodorant (“for when you sweat like a pig”). When vegetarians, observant Jews and Muslims fall off the dietary-restriction wagon, if they are American, it is often for a salty, fatty porcine morsel.

Bacon has become a culinary obsession not solely because Americans adore its smell and taste but also for underlying cultural reasons. As the country began over the past decade to collectively fall in love with food—to value dinner before the show as much or more than the show itself, to yearn for real butter on movie popcorn and to demand to know the provenance of meat, produce and spices—certain ingredients and dishes were elevated to celebrity status.

Cupcakes are one. Bacon is another.

Unlike plaids, pet rocks and pop rocks, these crazes will not disappear for decades at a time. Like first loves, they will always hold a special place in people’s hearts—but the U.S. consumer does have a short attention span and a nearly insatiable need for shiny, new things, be they pickled vegetables or bowls of pho. As a result, bacon slogans (“I love you more than bacon”) lately are making room for quips about kale (“Eat more kale”).

The shift represents a maturing of both the national palate and U.S. consumers’ attitudes toward food. It is hard to picture an Italian wearing a smiley-face T-shirt with two eggs for eyes and a curved bacon smile, because Italians and others with long-established food cultures have a reverence for their meals’ ingredients and where they come from. Americans are getting there, in part because they are sampling more and more delicious food beyond their usual boundaries. Media also play a role. There’s the satirical scene in “Portlandia” in which two restaurant patrons insist on knowing the details of their chicken’s social life that is so over the top that any other form of food curiosity seems normal. Chefs hold great sway, too, in restaurants and on television. David Chang, founder of the Momofuku restaurant group, has demonstrated that traditionally Asian dishes with an American twist—say, bacon—can be both inventive and delicious, something that earlier fusion experiments did not necessarily accomplish.

Fetishizing a particular food also brings people closer to it. They learn more about where it comes from—there are T-shirts showing where on a pig the bacon originates—and how it is made. Some people stop at the basics, such as the fact that it tastes good with many vegetables and desserts, something they might not have known before. Others learn how bacon is cured and how smoking it with different woods—maple, hickory, mesquite—changes the flavor. Still others familiarize themselves with bacon icons such as Allan Benton, Tennessee’s acclaimed “king of pork.” Finally, a select few who gaze deeply into the world of bacon can describe, using the word “umami,” why meat from a Mangalitsa pig is superior.

It is interesting that kale followed bacon so closely on the food-fad timeline, because kale is most often referred to as a yin food—light, cooling, calming—while bacon is yang—heavy, warming, energizing. People naturally balance those and other aspects of their diet; for example, including a salad with prime rib or following a sweet with something salty. Perhaps a green, leafy vegetable was necessary to offset all that bacon. While the newly popular foods might dilute the force of bacon in U.S. food culture, they will never overshadow or replace it. It will just have to make room for the growing pantheon of food Americans love.