As upmarket grocery retailers like Whole Foods Market expand into more midmarket zip codes, it is imperative that the trade-up costs for newer midmarket shoppers not be at the same level they were for the cart fillers who drove the company’s early growth in the 1990s.

Whole Foods Market is hardly a niche player in grocery retail anymore. It is a major force that everyone in the value chain needs to keep an eye on. As it and other upmarket grocers expand into more midmarket zip codes (e.g., suburbs and smaller towns), it is imperative that the trade-up costs for newer midmarket shoppers not be at the same level they were for the cart fillers who drove the company’s early growth in the 1990s. 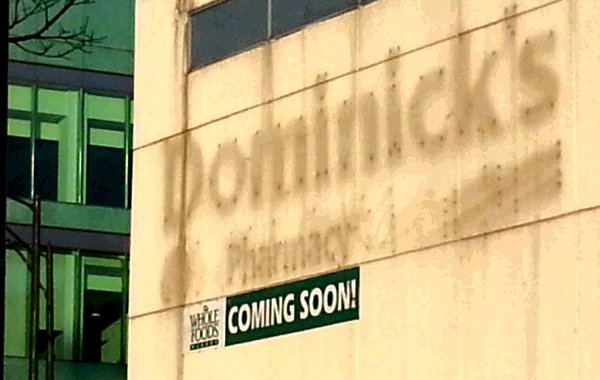 The Hartman Group's analysis shows that, as strong as the upmarket grocery sector is, it remains underpenetrated among its core shoppers compared to discount stores, with only 1.5 upmarket stores for every 50,000 upmarket (educated and affluent) consumers, compared to roughly 15 discount stores for every 50,000 downmarket consumers. And the natural/specialty channel still suffers from too high a proportion of its shopper base being infrequent visitors, as illustrated in the following chart, “Customer Visitation Rates by Channel”: 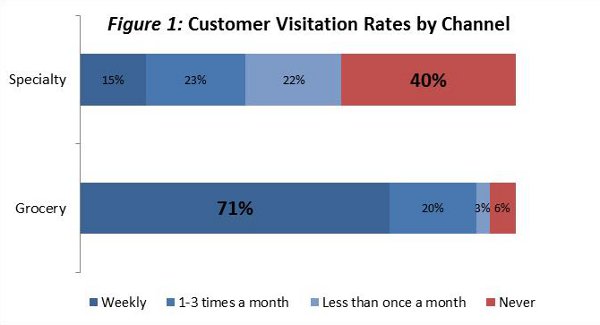 Source: Hartman Shopping Topography Study 2012; N=1,900; S7. How frequently do you shop at any of the following stores? Specialty channel includes Trader Joe’s and Whole Foods.

This leaves enormous upside for same-store sales growth that established midmarket grocery chains will never have.

But how does a company like Whole Foods capture this upside?

On last week’s earnings call, Co-CEO Walter Robb defended his company’s value strategy as the right move for the company. Whole Foods apparently intends to grow via “high-grade” conventional produce offerings and make organic more of an option than an essential part of the brand experience. With organic food now widely available in conventional stores (thanks to United Natural Foods, KeHE Distributors and others), we agree that it can no longer be the essence of Whole Foods’ growth strategy—and that focusing on the fresh perimeter is a worthy strategy.

The battle it faces is a larger version of the share-of-wallet battle it has always faced: to fill carts, not baskets, and to be used for everyday food procurement, not just special-occasion shopping. While expanding locations obviously helps this cause, getting the trade-up cost down a bit is also critical.

Why? The Hartman Group’s research shows that consumers whose primary grocery store is Whole Foods are nearly twice as likely to be part of the college-educated elite compared to the U.S. population as a whole. And, while the average four-person household in the U.S. spends about $464 a month on groceries (according to U.S. Bureau of Labor Statistics), it is not unheard of for four-person households loyal to Whole Foods to spend $1,200 to $1,500 a month there. To grow market penetration, a value strategy for any upmarket grocery chain has to reach for somewhere in the middle of this monthly grocery spending continuum without compromising quality.

But where in the store is the value battle to be waged as Whole Foods reaches into the midmarket? Clearly, 365 is a mature private-label program dealing with center-store trade- down in low-stakes commodities without compromising on the implicit natural, less processed promise of the brand. That work is largely done. But most Whole Foods shoppers fall in love with the place for its fresh perimeter offerings, especially younger consumers who don’t even stock pantries. The chain is tastier, more on-trend and contemporary than conventional grocers.

The fresh perimeter is where we believe the value proposition needs to be carefully designed as upmarket retailers move into less educated/affluent zip codes. This is because:

If Whole Foods can create a sense of relative value for the shoppers’ dollars in its fresh perimeter without sacrificing its above-average quality standards, it can make a value strategy work in the long term.

The long-term danger for upmarket disruptors like Whole Foods is slashing prices so deep that they effectively undersell themselves forever just to capture near-term volumes and positive same-store sales growth.

But players like Whole Foods don’t need to slash prices a great deal in the near term. The key will be calibrating value in the ultra-fresh perimeter while still redefining quality in a way that established veterans do not have the human capital or quality standards to match. We believe this is less about communicating standards and certifications to justify price and more about managing total sensory experience (both in the store, in communications and in the mouth) against absolute dollar benchmarks consumers carry in from conventional stores. Getting new, more impressionable shoppers to let go of the latter is a seductive art retailers like Whole Foods are extremely good at, once shoppers get in their stores. The brilliant use of flash sales on high-quality local produce and seafood is one of the smarter tactics we see Whole Foods use to communicate value without underselling itself throughout the store.

Ultimately, though, upmarket grocers win on theater, both in the mouth and with the in-store shopping experience. They don’t win purely on price plays or through flyers and marketing campaigns about great deals and prices. The winners like Whole Foods adapt their fresh perimeter, their primary profit and traffic driver, to the local trade-up habits of their operating zip codes and always, always upsell, even if less modestly per shopper than in years past.

As long as Whole Foods can continue its phenomenal track record of store-level tailoring and neighborhood adaptation, it can push upmarket fresh food trends deep into the midmarket at a pace local shoppers will allow. If upmarket grocers ensure that their operational in-store and product-quality excellence remains impossible to match by the bigger chains, the sense of relative shopper value will be sustainable.

But a note of caution:  Downmarket insurgents, like WinCo and other hard discounters with no frills yet high-touch operational models and full-service, fresh stores, are succeeding in growing super-cheap fresh outlets and could eventually move into natural/organic as prices come down.

Harvey Hartman is founder and chairman of The Hartman Group. James Richardson, Ph.D., leads Hartman Strategy, which works with the largest and most respected global food and beverage companies to identify, create and seize white-space opportunities that align with constantly evolving food culture.