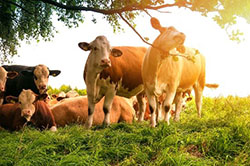 Chipotle, certainly no stranger to food safety and sustainability and transparency issues, was ahead of its time back in 2013 on one emerging trend that, in hindsight, they didn’t see coming. How many recall Chipotle’s “The Scarecrow” video that showed an animated scarecrow surrounded by images of industrial food that many consumers find increasingly disturbing today: cows in tight spaces being milked by machines, chickens plumped with saline and misleading marketing messages calling the food “all natural” and “farm fresh”? Although the scarecrow protagonist starts his own food business, he is shown picking vegetables for tacos, not raising animals at all; the film at the time did not depict a meaningful way out. Perhaps it’s time for a sequel (look what sequels have done for the film industry!).

Like they do with many other food ingredients increasingly found under a cultural spotlight, today’s consumers want greater transparency about the animal proteins they purchase. The reasons for greater public scrutiny on the backstory of where animal proteins come from (and how they were raised) are multidimensional, relating to beliefs about diet, ethics and the environment.

We know from our sustainability research that animal welfare has become a clear case of “better for me, better for the world” for the majority of consumers. According to our Sustainability 2017 report, when make purchasing decisions, 71% of consumers say that it is important to them that the company avoids inhumane treatment of animals.

A concern for animal welfare is often a key reason an individual first enters the World of Sustainability, but it can be primarily motivated by either morals or personal health.

Personal health is likely the more common driver, since however much consumers claim to desire a “happy life” for livestock, most are not willing to give up animal products. However, the two pathways are easily linked and become mutually reinforcing.

The two pathways also lead to the doorstep of the alternative meat/protein trend, something Chipotle’s video may have unwittingly hinted at.

Food companies are making rapid inroads into bringing innovative plant-based meat alternatives to market that align with consumers’ desire for meals that are healthier and better for the environment.

With Impossible Foods, Beyond Meat and Memphis Meat, there is a new breed of food company that has emerged focused on creating meat alternatives to meet consumers’ increasing interest in seeking meat alternatives or adding more protein to their diet. We might regard Carl’s Jr.’s partnership with Beyond Meat to produce a meatless version of its classic Famous Star burger and White Castle’s offering of Impossible Sliders as a harbinger of innovation in fast food burgers. Impossible Slider burgers (developed by Impossible Foods) are described as plant-based patties “that look, taste and ‘bleed’ just like real meat.” Real meat indeed.

Beyond Meat and Carl’s Jr. report that the decision to pursue the partnership was driven by consumer demand, and we fully expect to see more meatless burgers appearing on fast food menus in the near term as more consumers value the health, sustainability and animal welfare cues in these food items.

As we’ve reported before, the rise in consumer demand for meat analogues is being driven by three dynamic trends in food culture today: health and wellness, sustainability and culinary engagement.

Health and Wellness. Consumers are expressing greater interest in enhanced mind/body functionality by replacing refined carbohydrates with a wide range of proteins and fat-rich foods. They are also looking for a greater diversity of nutrient sources in their diets while expressing concerns relating to the perceived health impacts of industrially processed red meat, notably chemicals (e.g., antibiotics, hormones).

Sustainability. Sustainability is playing a role in demand for meat substitutes; namely, in desires to promote animal welfare coupled with a growing awareness of the ecological impacts of meat eating. Underscoring such thinking, our Sustainability 2017 report finds that among animal welfare practices that increase purchase likelihood, the top factor is “animals not mistreated while alive.”

Culinary Engagement. As consumers broaden their culinary engagement through new food and beverage experiences, meat substitutes are proving fertile territory for experimentation and novelty in their diets. Culinary engagement is also creating greater exposure to and interest in vegetable-focused cuisines and traditions.

Get the latest data, insights and strategic recommendations regarding food and technology, meat alternatives, plant-based foods, and sustainability and transparency:

Food and Technology 2019: From Lab-Grown to Plant-Based