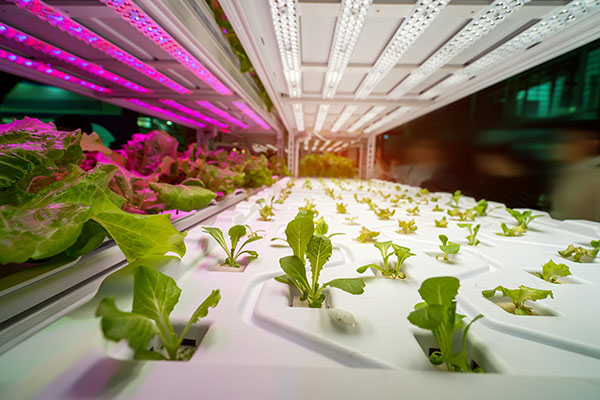 Sometimes the forces of cultural change seem to be headed in opposite directions, even when their ultimate goal is the same. The newest thinking on sustainable, healthy, delicious farming is that way, with one movement focused heavily on the importance of land and the soil and another completely eschewing soil for hydroponics in urban buildings.

On the pro-soil side is chef Dan Barber, whose new book, “The Third Plate: Field Notes on the Future of Food,” beautifully describes how vital it is that farmland be revived and soil depletion stop. He devotes half the book to land and the soil and spends two chapters detailing the efforts of Washington State University professor Steve Jones to make wheat an integral part of a sustainable farming system.

Barber’s point of view influences many chefs, food activists and others who are deeply entrenched in the way food is grown and eaten — people long associated with the organic movement who appear to be moving beyond it to something that better integrates the way we farm and the way we eat.

Another way to reach the same goal of sustainable, healthy, delicious food is through indoor farming — that is, hydroponics in urban landscapes. The idea springs from improved technology plus a worldwide economic crisis that has left major cities with empty buildings.

With consumers increasingly motivated to buy fresh, local food, it’s a sustainability solution that could boom despite the lack of soil. People think of local food as fresher, because it takes less time to reach their plates. And freshness is always a huge driver for demand. (For more, see The Hartman Group’s recent article, “The Potential of Local Produce Without the Farm.”)

In Amsterdam, where some industrial shells can be had for a dollar, agricultural futurist John Apesos is speaking the gospel of hydroponics. He envisions a world where microgreens, lettuce and herbs can be grown just a few miles from where they are eaten — and with far fewer resources than farmland requires.

“How do we feed the (growing population) without destroying the planet? Let’s take food production and move it to where the next billion people will be,” he said during an award-winning TEDx talk in Amsterdam.

Known as indoor farming, vertical growing and food urbanism, it is very new. Although a lot of food is grown hydroponically — in Holland, half of fruit and vegetable production comes from hydroponic greenhouses — it’s grown mostly in rural areas, and some question whether that model would be profitable in cities.

No one expects hydroponics to be used for major field crops like wheat and corn. In fact, some people think those crops could shrink in commercial importance if consumers are able to access other types of produce more easily. Many field crops became important because they were easily stored, something that would not be as necessary for produce grown just across town.

The technological breakthroughs are happening at the same time consumers are clamoring for more fresh, less processed foods. And some companies have launched urban growing endeavors. There are “plant factories” in Japan (Nuvege), England (Thanet Earth), Berlin (InFarm) and Chicago (FarmedHere), and Apesos has built prototypes with help from LED lighting and horticultural suppliers, the Innovation Lab Project at the Hogeschool van Amsterdam and others. Through his start-up, Symbicity, he’s also working toward a larger-scale commercial pilot.

To Apesos, commercial rooftop farming (such as what Whole Foods is doing in Brooklyn) is “the tip of the spear in terms of local.” Roofs alone cannot produce the volume that’s needed to create a major shift in agriculture. In his vision, that will involve using empty buildings and reclaiming tunnels and other underused infrastructure.

Compared to field and greenhouse farming, indoor growing tends to use less water (less evaporation) and fewer fossil fuels for transportation, but more electricity. To pay for that, Apesos hopes to partner with retailers who are interested in selling real food and creating price security within their communities.

Ultimately, the soil and soil-less movements aim for the same goal: to bring fresh, healthy food to consumers’ plates without harming the environment or people’s bodies. Just as culinary movements can work on opposite corners of the same quilt — see The Hartman Group’s recent perspective on the political and technological efforts of contemporary chefs, all motivated by a desire for higher-quality food — so can agricultural movements work toward sustainability in seemingly opposite ways.

All are motivated by a love of the earth, good food — and giving consumers what they want.