Like many food and beverage products and ingredients increasingly found under a cultural spotlight, consumers want greater transparency about the animal proteins they purchase today. The reasons for greater public scrutiny on the backstory of where animal proteins come from (and how they are raised) are multidimensional, relating to beliefs about diet, ethics and the environment.

As a culture, we've also been thinking about animal welfare for at least a century: Upton Sinclair sounded an alarm about both animal and worker welfare with the publication of "The Jungle" in 1905. “The Jungle” raised awareness about the mistreatment of workers and faults in the American meatpacking industry and created tensions that eventually influenced the development of the Food and Drug Administration.

Today, animal welfare is no longer a niche issue of consumers in the core of the worlds of sustainability or organic and natural; it is a topic becoming very familiar to an increasing number of mainstream consumers helped along by recent books like David Kirby's "Animal Factory: The Looming Threat of Industrial Pig, Dairy and Poultry Farms to Humans and the Environment” and "The Chain: Farm, Factory, and the Fate of Our Food" by Ted Genoways.

Consumers are increasingly drawing connections between their own health and the conditions in which animals are raised. Our latest sustainability report, Transparency 2015: Establishing Trust with Consumers, finds that definitions of sustainability increasingly relate to responsible agricultural and natural resource practices, while concerns for fair treatment of both animals and workers are on the rise. Almost half of consumers (47 percent) say they support companies that avoid inhumane treatment of animals (up 6 points from 2013). They also want to know more about:

Other key areas of concerned are depicted in the following chart: 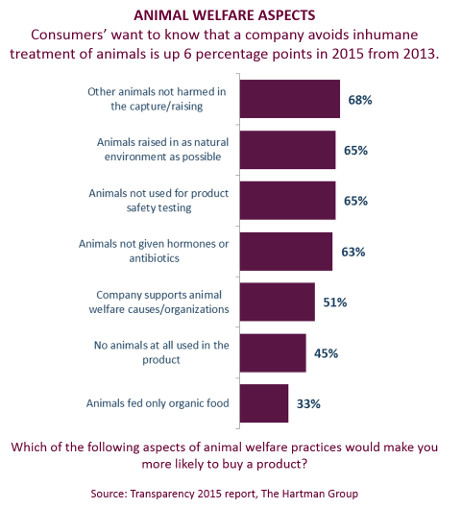 Above all else, companies earn consumer trust by being more open about what is in their products. Knowing ingredients (what they are and where they come from), quality manufacturing processes, animal welfare and employee treatment top the list of what will help consumers develop trust in a company. The ingredients consumers are most interested to know about are listed in the following chart: 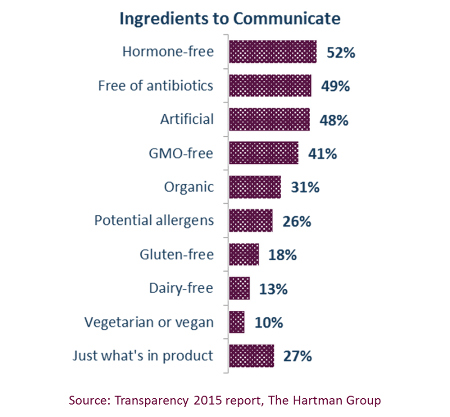 In the days ahead, concern for big issues like GMOs and animal welfare will not lessen in intensity. Retailers, restaurants, suppliers and processors will need to better understand some fundamental concepts about improving the dialogue with consumers. Begin with being transparent about what’s in the food and beverage products, where ingredients are sourced and how they are made. Pick a practice or an ingredient and tell the story. Be willing to engage with consumers and be open to their feedback. Product and production narratives help build quality perceptions and provide a jumping-off point to being to communicate more complex or sensitive topics down the road.