Physicians can’t adequately counsel patients on how to effectively lose weight or provide guidance on healthier eating if they don’t have the foundational education in nutritional science and cooking. 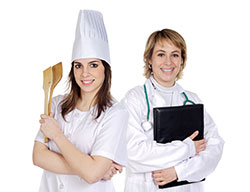 Over the past decade or so, the mainstream medical community has begun to embrace the vital role of food not only in preventing illness but in treating it, too. The Hartman Group’s Health + Wellness 2019 report finds that consumers are either treating or preventing an average of 9.6 health conditions in their households. Many consumers today see food and beverage as key remedies for their health conditions.

An emerging field called Culinary Medicine is tapping science-based nutrition knowledge to equip physicians with the skills to incorporate evidence-based lifestyle interventions in their work. Born out of an acknowledgement by physicians that their medical school training leaves a gap in nutritional knowledge and fails to provide them with the ability to help patients put into practice advice to “lose weight” or “eat healthier,” Culinary Medicine brings together dieticians, chefs, physicians, and med school students for hands-on training in cooking. A 2008 study of internal medicine interns found that, while they perceived nutritional counseling as a priority, they lacked the confidence and knowledge to effectively provide adequate nutritional education to their patients. Med school students and physicians in other countries, too, have sounded alarms about their lack of nutritional education and responded with initiatives to remedy those gaps.

The first dedicated teaching kitchen implemented in a medical school was the Goldring Center for Culinary Medicine at Tulane University. Since 2012, the culinary medicine curriculum there has been compulsory for its medical students while also offering licensed online courses to other residency programs. Other programs have followed suit, backed by hospitals, medical schools, or schools of public health that have incorporated nutritional science and cooking into preparing the doctors of the future.

These programs have also begun reaching beyond medical professionals. Tulane, for example, also offers classes for patients that help them learn how to shop for and prepare healthier foods — how to make healthier eating decisions all around. Both within and outside of medical schools, programs and studies are looking to measure concrete impacts of nutritional education and provision of healthy foods on metrics such as readmissions, referrals to long-term care, and compliance with medication and treatment. Low-income and “food insecure” patients have become a key focus as medical professionals have begun to acknowledge the role of social and economic context in health outcomes.

As groundbreaking as these changes may be, what is also interesting is how late to the game doctors seem to be. Sure, physicians have long offered dietary

advice such as “lose weight” combined with general guidelines such as “watch your fat and cholesterol” and “cut down on red meat and junk food.” But compare this advice with the work of, say, Dr. Andrew Weil, who has been working to combine complementary and alternative medicine with conventional, evidence-based medicine for a number of years. Or with Dr. Mark Hyman, Director of Cleveland Clinic’s Center for Functional Medicine. The work of these physicians is more closely aligned than “mainstream” medical practitioners are with the aspirations and habits of today’s relatively forward-leaning and engaged consumers.

Also interesting in this dynamic is the role of chefs. Many of the chefs working in these programs are trained dieticians, bringing their knowledge of nutrition and training in cooking to educating physicians and patients. While certainly nutritional-scientific knowledge is feeding these initiatives, changes in how  medical (and education) institutions think about both the physical act and the social context of eating are also coming from outside those systems. Take the example of Dan Giusti, former head chef at Noma, who is now running a program called Brigaid that brings professional chefs to cook at public school cafeterias. Granted, this is somewhat of a tangential example, but it highlights the influence that the culinary world is having on the broader food system via chefs channeling their work and talents in new directions.

At one level, this shift reveals just how powerful the acceptance of food and eating as central to health and wellness has become.

To the extent that physicians are part of the cultural apparatus that shapes and drives shifts in consumer aspirations and practices, this more active engagement is likely to accelerate the spread of contemporary health and wellness culture, particularly for those consumers whose health and wellness journeys tend to be triggered and driven by medical conditions and advice.

This may have implications for how consumers eat and shop — label reading, store choice, food prep and cooking, even engagement with digital tech. At another level, it suggests a direction of cultural influence moving from more niche and forward-leaning areas of food culture into medical institutions.

But it also underscores some challenges for these institutions. Consider the infrastructural barriers that stand in the way of hospitals (and schools, for that matter) adapting to these trends. Providing the kind of food that is not only healthy in general, but that may also contribute to treating specific conditions (think, for example, of the ways Core consumers are using botanicals, herbs, nootropics, Ayurvedic traditions, etc., for energy, brain health, and other targeted needs) requires sourcing, preparing, and cooking — expertise perhaps beyond traditional institutional capabilities.

So, with this, a fundamental question is raised about what counts as “evidence” of health benefits. How much trust will mainstream medicine have in food trends coming from the world of Core health, where evidence may be scarce or not yet fully “established”? How much authority will it yield to or share with culinary specialists? And, to the extent that a dimension of this shift toward “food as/is medicine” also involves understandings of “food as therapy” that focuses on the social context of food — not just what is eaten, but when, how, and with whom — what will the capacity of mainstream medicine be to incorporate these kinds of dimensions into day-to-day practice? 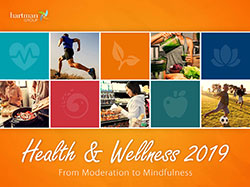 The latest in The Hartman Group’s long-running syndicated research series on health and wellness, Health + Wellness 2019: From Moderation to Mindfulness explores what’s new, what’s mainstream, and what’s around the bend in the world of health and wellness.