Our Evolving Consumer Culture and the Diversity of American Foodways 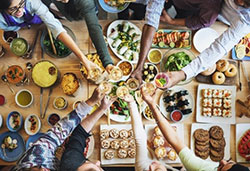 Assimilation is what used to happen to immigrants when we thought that America was a big melting pot. Immigrants arrived as young men and women, adapting as necessity required to their new environment but still living very much out of the traditions and values of their culture of origin. And as they grew older, they watched as their children became more American and as their grandchildren grew up with hardly any sense at all of the kind of world from which their grandparents came.

As the “American consumer” evolves to represent an ever more ethnically diverse and globally connected population, American food culture and trends both reflect and are driven by this diversity.

In fact, American cuisine has always been a reflection of our status as an immigrant nation — only a nation like ours could develop foods like Hawaiian-style pizza (with pineapple and Canadian bacon), California burritos (which include French fries), bulgogi tacos (tacos filled with Korean BBQ), or Philadelphia sushi rolls (with smoked salmon, scallions, and cream cheese — the taste of a Jewish deli in sushi form).

We look to be in for even more exciting food and beverage innovation to come, with almost one in two Gen Z consumers identifying with a race or ethnicity besides White, and first- and second-generation immigrants representing a quarter of the population. This diversity reflects a globally connected world, where consumers are increasingly able to recreate or innovate on the tastes of home (whatever that may mean) and share them with others.

Without a doubt, our ethnically diverse marketplace is a virtual, vital cradle for fresh opportunities. Throughout our years as social scientists and cultural anthropologists, we have uncovered an insight into cultural and natural identity that applies to all people who live in America regardless of background: Americans cannot, nor should they, be defined by a single lens. Marketers would be making a grave mistake to try to generalize or simplify any demographic segment of the population.

Globalization, modern Americana, and tradition all play a role in creating personal identity, lifestyles, and interactions in any given context. Taken together, they create a multicultural consumer.

Energized with decades of U.S. Census Bureau data and projections, marketers, analysts, and strategists have increasingly looked to the diversification of America’s consumers as a source for short- and long-term growth. While we understand this sense of opportunity and optimism, we are also aware of the significant complexities that lie ahead for those wishing to serve this most diverse consumer base.

For this reason, we are fielding a new syndicated research study, Exploring the Diversity of American Foodways.

The Hartman Group has been studying the dynamic food culture of the U.S. for decades. Exploring the Diversity of American Foodways will focus on groups that are often underreported and understudied, including African Americans, Asian Americans, Hispanic/Latinx Americans, and first- and second-generation immigrants. This study will shine a light on groups normally represented as small portions of the general population and whose attitudes and approaches to food often end up in the margins but whose contributions to American food culture punch far above their weight.

How do members of these communities approach food, eating, and drinking? What does health and wellness or sustainability mean to them and what roles do they play when it comes to food and drink? What aspirations, challenges, and unmet needs do these various groups have regarding food, grocery shopping, and restaurants?

Ultimately, Exploring the Diversity of American Foodways will highlight what unique sensibilities are emerging from America’s diverse population and what values and practices we share in spite of our differences. Understanding the social dynamics that are driving evolutionary changes in our American food culture is at the heart of our new study.

Pre-order by November 30 and save $2,500, plus take delivery of the report as soon as it becomes available! ORDER NOW