Stacking the Deck for Health and Nutrition: Flexitarians and the Rise of the Carnivorous Vegetarian 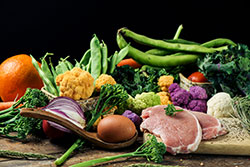 After decades of intense meat worship, chefs are procuring, preparing, and serving vegetables with the same love and attention they previously reserved for prime cuts of beef. Today, the center of the plate can just as likely mean a plant-based protein alternative as it can a meat, poultry, or seafood protein.

Rising interest in plant-based foods has spurred a resurgence in the flexitarian approach to eating and the need to understand flexitarian consumers. Flexitarianism and plant-based are two modern approaches to eating that progressive consumers utilize to stack the nutritional deck for optimal results on a daily basis. Whether flexitarian or plant-based, each dieting ideology has successes and each path differs. Ultimately, such eating styles are about wellness and human performance.

According to our Food & Technology 2019: From Plant-based to Lab-grown report, while 1 in 4 consumers (26%) say they limit their consumption of animal products in some way, only 6% of consumers self-report typically eating flexitarian (10% of plant-based purchasers self-describe as flexitarians).

Consumers who are looking to cut out meat during the day to save calories or cut back on it during the week to save money or wear-and-tear on the planet are attracted to the flexitarian style of eating.

Of course, health concerns are the primary motivation behind flexitarian eating, while environmentalism is a secondary driver. We have found flexitarians to be more food- and flavor-focused, so health today is less about low-fat, low-carb and more about full flavor, and on some occasions, full (good) fats.

This is moving away from the small-planet, Moosewood Cookbook era of lentil loaves in favor of ethnic and global cuisine. Here, the vegetable is celebrated and fresh is now becoming paramount. Vegetable-centric chefs aren’t pretending vegetables are meat or a meat-like substitute anymore. They are looking to cultures where there is an inherent knowledge in vegetable preparation (e.g., Asia, Italy, France, India), using classical techniques with the addition of modern interpretations.

Avoiding or minimizing meat and animal products has expanded far beyond vegans and vegetarians. Likewise, veganism and vegetarianism are no longer all-encompassing identities but approaches to dip in and out of. Our Health + Wellness 2019 report finds 9% of consumers have tried a vegetarian approach to eating in the past 12 months compared to 6% who say they’ve tried veganism.

As concerns about animal welfare have become mainstream, more consumers — especially younger ones — have begun to question whether any animal products are healthy, sustainable, or ethical to eat. At the same time, protein has become a ubiquitous callout, which may undermine the traditional notion that animal products are essential sources of protein. By focusing on vegetables, meat becomes more of an accent yet isn’t necessarily verboten.

Still, vegetables have such a strong health halo that many believe there is no limit on how much one can healthfully eat. Thus, veganism, which emphasizes vegetables, has become the epitome of a healthy diet to many consumers, even though vegans tend to be deficient in key nutrients.

Plant-based callouts play into this trend but risk diluting the strength of their health halo as they are applied to a proliferation of highly processed vegan “junk food.”

The recent proliferation of plant-based meat, cheese, and dairy analogs means that veganism is more accessible for the mainstream consumer than ever before. At the same time, veganism as a lifestyle is supported by Instagram influencers and trendy cooking resources.

The result is that “going vegan” is often an aspiration — especially among younger consumers. However, action is often limited by their own knowledge, cooking skills, time, and financial resources.

Get the insights you need to find success in plant-based foods innovation with these two Hartman Group reports: Food & Technology 2019 and Health + Wellness 2019