Habits of the Male Shopper 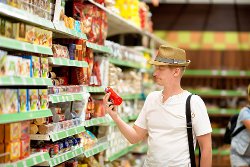 Long has lived the myth that almighty Mom is solely responsible for a household’s grocery shopping. But The Hartman Group’s latest report, “Food Shopping in America 2014,” in addition to stories like the one in the New York Times about working dads spending more time in the kitchen (and at the store), is proving that men may be increasingly more gatherer than hunter.

Though fewer men are primary grocery shoppers (43 percent, according to the “Food Shopping in America 2014” report, with the rest playing more of a supporting role in the process), both sexes are now making the same number of store visits each month: approximately 15, via three different channels each week.

“I go to the grocery store several times a week,” says Mark, a 41-year-old accountant interviewed by Hartman Group analysts. “Before work. After work. Sometimes just to pick up one item.”

Mark is not alone. Men tend to prefer a “search-and-retrieve” form of shopping (i.e., running in for a single item), whereas women generally prefer to browse before they buy. And what is it that men are shopping for? Their baskets are fuller of meat and alcoholic beverages than women’s are, but there’s still a fair amount of produce, sweets, and snacks. 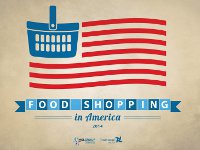 Search and retrieve is all about getting in and out of the store as quickly as possible. Instead of shopping sales and planning ahead, men are overwhelmingly concerned with convenience and finding what they need quickly above all else, illustrated in the report by their predilection for shopping club stores like Costco and Sam’s Club, convenience stores like 7-Eleven and online.

While online grocery shoppers purchase more frequently, averaging four channels per week and 22 visits per month, online purchasing is the only male-skewed channel, with 56 percent of buyers being men.

“I like to get specialty items online,” says study participant Jeri, age 40. “I get organic pet foods that you can’t find anywhere but AmazonFresh.”

“The only problem with [online] grocery shopping is that I don’t really like to order perishables,” comments Rob, a 43-year-old interviewed by Hartman Group analysts in the research. “I feel that fresh food is hard to deliver and can easily be bruised or spoiled. Also, what happens to the fresh food if it’s delivered and I’m not home?”

Cater to the Male Shopper

You can no longer ignore the male shopper. As mentioned earlier in the article, with such a strong contingent of primary shoppers men, today’s male consumers need to be considered in product innovation, merchandising and other marketing efforts. Don’t mistake their lack of planning for lack of caring or think they are willing to accept items of lesser quality with higher price tags.

In the grocery channel, keep in mind that men cook, too. While a “man aisle” may not be the best solution, it’s worth considering more male-focused marketing aside from the usual barbecue, beer and spirits. More and more males are not only the primary shopper but the primary cook. They are interested in quality food, artisanal products, ethnic flavors and restaurant-inspired cooking.

Men love the club store. The treasures to be found, along with the beer and wine, season by season, make this a favorite place for them to browse among the warehouse aisles.

Men are concerned with what’s fastest and easiest. Male shoppers have higher average income, making them generally less interested in sales and coupons and finding the best deal. Men benefit more from brand name recognition and advertisements because of this. Retailers shouldn’t try to alter the male shopper’s inherent habit of search-and-retrieve. Embrace it. Make the most of male shopping habits by offering tools and services to assist men in quickly finding and buying what they want.

For further information about “Food Shopping in America 2014,” which explores the great cultural transformation of channel selection and shopping behavior, download the report overview.