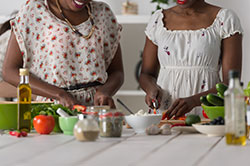 Consumers are eager to try new culinary adventures today, and when we step back from the bewildering creativity of modern urban restaurants, cafes, retailers, chefs, and artisan food producers, we see two basic themes:

• higher-quality ingredients in familiar foods that we normally consume

And yet, what is “uncommon” to an individual will vary so much that the term becomes hazy and almost meaningless. So we use it here at the societal level to explain that which is rare and not easily found at Walmart or the local grocery store or at McDonald’s or Applebee’s. For higher-quality ingredients, we point to the fact that almost any familiar food (for example, “mac and cheese” or potato chips) can be made with very low-quality ingredients to create one kind of experience of the food and with extremely high-quality ingredients to create another experience of the same food. This enormous range creates opportunity, especially at the higher end.

These twin aspects of the culinary world often combine, especially in the restaurant world today as it spreads global cuisine deeper into everyday American food culture. For some time, traditional marketers have avoided the uncommon: familiar food and beverage forms and familiar flavors always test better and sell better (at least in the first year). But most producers in the food and beverage industry, whatever the sector, can raise their ingredient quality as long as they think there is an audience who will pay more for it. Thus, one question arises: where do consumers seek out these two aspects of the culinary world?

The “uncommon” aspect of the culinary world is still primarily owned by the restaurant world, since we tend to associate rare foods with specific occasions in which we are more likely to be in the mood to “venture beyond” our daily routines. Hartman Group research going back many years has shown that eating out is an occasion for adventure and indulgences. It’s when we are most likely to depart from our culinary norms and try rare or uncommon tastes. Similarly, within home-based culinary practices, there are certain iconic times of the week when we have learned to “explore” beyond our comfort zone (for example: weekends).

Also, within certain food and beverage categories associated with scratch cooking and entertaining, we see consumers more openly experimenting with the uncommon. In fact, parties are where we often see the uncommon food du jour showcased by friends or family. Not showcasing something new and interesting is becoming bad form in more and more home get-togethers, whether casual or formal. And most of America has decent access to specialty food retailers set up to deliver the uncommon. Categories at retail where the rare and uncommon are found include cooking sauces, herbs/spices, marinated fresh items, heritage meat/seafood items, emerging salty/savory snacks, spreads/dips, wine/beer, and still/sparkling beverages.

What’s important to realize is that what is uncommon now can become routinized relatively quickly in contemporary food culture. For example, hummus has gone from being a classy dinner party spread ten years ago to a routine snack spread people use like they once used ranch dip.

Food and beverage artisans are viewed by curious consumers as a nexus of hyperlocal and superlative-quality distinctions. While not a large percentage of any category’s market share, businesses linked to artisanal products punch well above their weight in terms of influencing category trends. In artisanal experiences, we find the influence of restaurants powerful but more constrained, specifically because chains cannot scale artisanal-quality cooking profitably very well due to ingredient costs being so high on the initial part of the growth curve.

In food retail, however, there is a much broader array of categories in which local food artisans sell their wares. Specifically, we see that artisanal influences affect fresh categories (e.g., cheese, bread, baked goods, prepared foods, cooking ingredients) and beverages (e.g., waters and cocktail ingredients). Many other potential categories can be included within food retail, including wine/beer, chocolate, cooking sauces, fine cooking oils, yogurt, crackers, select condiments, soda, and coffee.

In hindsight, we should consider that dinner lineups in American homes have come a long way over the past few decades. Food trends, including a globalization of food culture and increased restaurant usage, are expanding the palates of consumers and inspiring them to experiment with new foods and flavors. Reflecting new dining experiences as well as experiences in their kitchens, at specialty grocery stores, and at their dining room tables, consumers across the nation are transforming themselves into chefs de cuisine in their very own homes and experimenting with “cooking up excitement.” 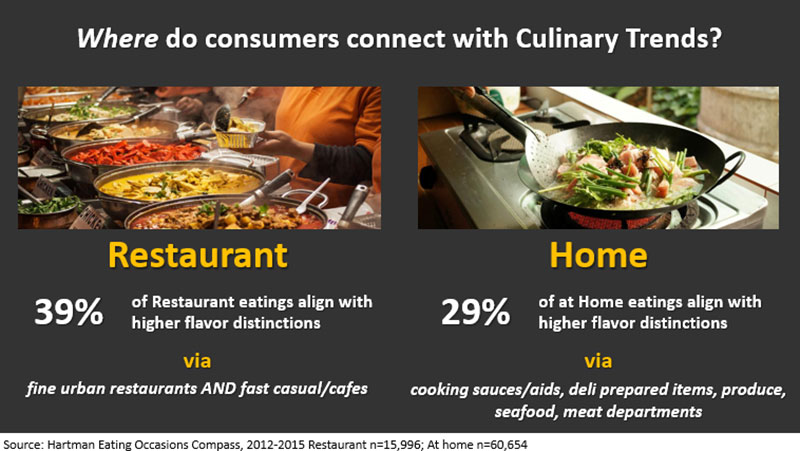 While we often associate all things culinary with some Saturday evening “dining out” adventure at a restaurant downtown, the reality is that the American home is not that far behind the American restaurant in terms of proportional demand for distinctive vs. ordinary/routine flavor experiences. Analysis of Hartman Group Eating Occasions Compass data shows that 39% of restaurant-sourced eating occasions (including takeout) veer strongly toward interest in culinary aspects of eating (via fine urban restaurants and fast casual/cafes), whereas 29% of at-home eatings do (via cooking sauces/aids, deli prepared items, produce, seafood, meat departments).

• What this confirms is that there indeed is a portal connecting the restaurant world with the home meal culinary experience, even though there is some turbulence caused by lack of cooking skills.

• The connection between restaurant culinary experiences and food and beverage new product development is an important one. For example, in the realm of packaged foods manufacturers, snack foods are a typical entry point for experimentation with restaurant flavors. While it sounds somewhat mundane to “reinvent” a snack food like potato chips, consumers seem to welcome them with open arms (e.g., Kettle Chips). In other words, there is high permissibility with very familiar foods that might be amenable to flavor enhancements.

• To further illustrate, the potato chip has come a long way over the years and found great success reinvented with flavors like wasabi, garlic, a variety of herbs, and cracked pepper (to name a few). Spicing up a familiar staple with an interesting flavor like wasabi can be appreciated on a variety of levels by a diversity of consumers ranging from the foodie who is well versed in “all things wasabi” to the less culinary-inspired consumer who has no clue what wasabi is other than “a green and interesting flavor.”

• Overall, shoppers are increasingly seeking out higher-quality experiences when it comes to culinary experiences and are consistently hoping to find the new flavors and foods they experience in restaurants (e.g., local, seasonal, or ethnic) translated for them on store shelves. Opportunities await those food manufacturers and retailers innovative enough to capitalize on restaurant trends: consumers increasingly expect the surprise and delight experienced when dining out to be found in diverse packaged goods and prepared foods.