From Tank to Table? The Potential of Local Produce Without the Farm 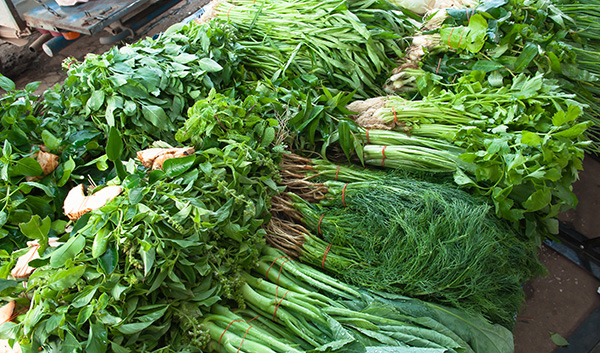 Local continues to be the emerging killer quality marker in American food culture. Roughly half of American consumers have bought local produce in the past year, according to a recent poll by The Hartman Group. Although the notion of local really took off years ago in top foodie markets (e.g., Seattle, Portland, San Francisco, New York), it now has a presence on independent restaurant menus in virtually every U.S. market. If you think we’re exaggerating, check out the Harvest Kitchen & Lounge in the most unlikely of places: Solon, Ohio.

Grocers are trying to bring in local produce wherever and whenever possible to stores where they know shoppers crave it. The problem has always been operational. Almost half of the U.S. population lives in a state with cold winter and a correspondingly short local growing season (defined as five months or less). Before long-distance produce supply chains, people in these states canned their fresh local produce for winter consumption. They also did not have as global a vegetable palate as today’s urban dweller. Roots and tubers store well without processing, but what about a bucket of mixed greens?

While most shoppers are used to fluctuating between a seasonal local emporium and a winter’s tale of hauled-in goodness, their acceptance of that fluctuation does not mean they don’t notice the difference. In fact, as we’ve found with many food trends in the past decade or so, increased rates of exposure to higher-quality versions of everyday foods are altering the shoppers’ palates and how they evaluate their grocer’s winter offerings. While Whole Foods has chosen to cultivate Mexican and Ecuadoran suppliers who can produce very high-quality organic produce for their entire national system year-round, even its shoppers claim to be able to taste the difference between organic produce shipped across vast distances and locally grown, farm-to-table produce offerings.

We know of several ventures trying to bridge the “January gap” in local produce. Some folks are using greenhouse concepts. Some are using hydroponic operations that grow local, tank-fed seafood whose waste fertilizes the hydroponic produce operations.

But can greenhouse and hydroponically grown produce ever count as local? Will it eventually catch on? Can you delete the farm and still sell local produce to discriminating shoppers used to romantic notions of farm-to-table goodness? Early sales performance from Urban Organics in St. Paul indicates that demand is sustainable even when there is no farm involved. Why might this be so?

To explore the potential of non-far-based local produce, we did a quick online poll of U.S. adults to understand how buyers of local produce explain its importance to them. The results reveal key marketing levers that can help consumers overlook the non-romantic aspects of farmless local production techniques.

The top drivers of local produce are fascinating: 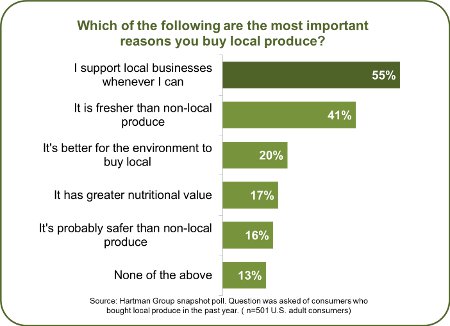 The simple desire to spend money locally is the surprising winner among the top reasons consumers have given over the years. It connects to emerging notions of doing good through one’s food choices. A close second is the belief that locally grown produce is fresher, in part because it is grown on a smaller scale and takes less time to reach our plates. Despite the attitudinal findings we see above, freshness (and the perception of better flavor) will always be the strongest demand driver in our view, because they affect the eating experience and the memory of the shopper the next time they’re in the produce aisle. Supporting local businesses is more of an impulse-shopping driver, not as powerful as the memory of great food itself.

What is interesting is that both greenhouse and hydroponic operations can easily connect to these top two criteria without romantic farm imagery or Halloween pumpkin festivals for the kids. The key is simply getting the product onto people’s plates. It may even be that these technological innovations will help spread the year-round availability and affordability of top-quality, super-delicate produce (e.g., fresh herbs and salad greens). All this will work only if newer produce-growing operational models can be fine-tuned, branded and scaled like processed-food factories were decades ago.

James Richardson, Ph.D., leads Hartman Strategy, which works with the largest and most respected global food and beverage companies to identify, create and seize white-space opportunities that align with constantly evolving food culture.