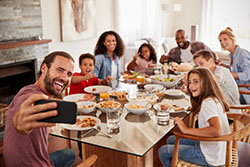 Consumers still aspire to an ideal that references a distant (imagined) past. Most consumers still believe in and aspire to an ideal — a healthy meal, made from scratch, enjoyed with others — that stands in contrast to the reality of most of their meals. Their goals and aspirations for mealtimes reflect this ideal — more home cooking, less processed food, more eating with others.

The notions of an ideal meal were born in a time when the husband was the breadwinner and the wife a homemaker. It was a time when three “square” meals were prepared on a routine schedule. A single menu expertly planned and prepared from scratch by Mom and enjoyed by all. Meal components were structured — for dinner, a meat, vegetable, and starch — and served family style. The family gathered around the dinner table in a single-family home. These were the halcyon days of Leave It to Beaver and the Cleaver family in the 1950s and 60s.

Ah, but our most sacred meal, dinner, wasn’t always special. The industrial revolution of the mid-1800s made dinner special.

Dinner conversation became an art form. As Americans transitioned from farm to factory work, the midday meal was eaten later in the day because workers worked away from home. The evening meal now became the time that family came together. Plus, the rising importance of social class made dinner a classroom for manners and a training ground for worldly success. Dining rooms also came into fashion for middle-class homes, which shows the rising importance of dinner as a ritual of family bonding. Special dining furniture and dinnerware all emerged at this time, too, to reinforce the meal as civil, sophisticated, and polite.

Snacking was highly discouraged (a matter of morals). Snacking was also thought to compromise the metabolism, and only children were permitted the occasional snack.

French cuisine and dining customs (service à la russe) were in fashion. This is where our custom of a soup course, main course, salad course, and dessert course comes from. Also, some of our existing food terminology (hors d’oeuvres, sauté, and à la mode) owes its origins to this era of French fascination.

The new ordinary meal had become special because of its ordinariness as it was characteristically American. Frugality, simplicity, and thrift — uniquely American values of independence and survival — birthed less fussy, simplified dining. 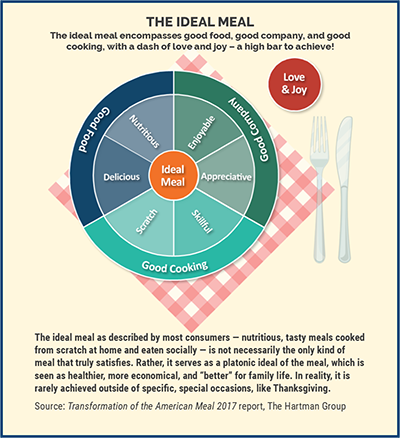 The image most often associated with this period of American meals is Norman Rockwell’s iconic painting (Freedom from Want) of Thanksgiving dinner that depicts plain fare without wine or fancy tableware. This portrait epitomized the new dinnertime ideal that uniquely celebrated American heritage, connecting us with our Pilgrim roots.

By WWII, the simple, everyday American dinner became a symbol of patriotism. This style of the family dinner ideal reached its zenith in the 1950s and has declined gradually ever since.

How We Eat Today

Mealtime now resembles how most consumers grew up, not the ideal. Consumers reference the past with their mealtime aspirations, but their lived pasts are typically more complicated.

Meals today are different because they are no longer the anchors of our day or the building blocks of the daily schedule. There was a time in our history when mealtime was sacred and you built everything else around it. Today we live in a different way where meals are just kind of getting fit in wherever they can. Rather than organize their lives around mealtimes, most now organize their lives (and eating) around work and other activities.

Consumers report eating more smaller, healthier meals at home than in the past — though some of this may be aspirational. In general, life-stage changes typically have the greatest impact on consumers’ mealtime habits.

Our Transformation of the American Meal 2017 report finds that life-stage changes have the biggest impact on consumers’ mealtime habits, but roles and routines learned in childhood are the foundation of mealtimes later.

Most adults today grew up with meals that resemble their current habits more than the imagined ideal. That is, time and energy were scarce, and convenience foods that got dinner on the table quickly were the norm.

How much one learned to cook growing up depended on how engaged one’s mother (or perhaps wider family) was in cooking, and one’s own interest. Consumers who had a close-knit, extended family that cooked together are often more engaged with cooking. Those whose mothers insisted on more help in the kitchen also tend to be more engaged. Girls are still more likely than boys to be socialized to cook and often know a bit more when they move out on their own.

Other key triggers for change include living on your own, getting healthy, living with a partner, having children, older children in the household, and empty nests/getting older.

The Future of the American Meal

Meals may become less frequent, but families will buck the trend — especially at dinner. Breaking bread with another is a fundamental way for humans to connect and define our civilization. Our attachment to the dinner ideal and its social/emotional role will sustain the dinner meal occasion. As other meals give way to snackification, dinner will become prioritized. We will need it to anchor our humanity as technological and socioeconomic changes continue to reshape who we are and how we live and work.

What are the implications of changes in American meals for your business? Learn more by contacting: shelley@hartman-group.com