The Influence of College Dining: Education Beyond the Classroom

College dining halls are increasingly being seen as an extension of the classroom where students are being educated about healthy and sustainable food choices. During their college years, students are figuring out who they will be as food consumers, and those decisions will follow them into the marketplace long after graduation.

“We take an interactive approach to learning that touches every aspect of a student’s experience at UMass,” said Garett DiStefano, executive director of residential dining at University of Massachusetts. “When students come into the cafeteria to eat, they are not just coming in for a meal, especially in the first two years. They are experimenting with how they eat and what they eat and they are beginning to understand that what they eat has a global influence.”

June Jo Lee, vice president of strategic insights for The Hartman Group, who worked with DiStefano on a UMass meal plan project last year, agrees. “Kids are starting to explore at an earlier age and are learning to eat what they like. Customization is important to kids and it becomes even more important in college, where they don’t just have to eat what their mother is serving,” she said. “Since they are the consumers of tomorrow, Hartman and UMass felt strongly that it is a responsibility of colleges and universities to help students transition to becoming more food literate.”

DiStefano said he sees student attitudes about food shifting toward more mindful choices about what they are consuming. Humanely raised foods and locally sourced foods were the top two concerns of students when they were asked to rank how important a number of aspects were to them. “A majority of students said they believed consuming locally grown foods could help them be healthier,” said DiStefano. “This fall we are serving antibiotic-free chicken in our dining halls, which addressed another big concern.”

UMass is working on better labeling in the cafeteria that will deliver information on the foods served there. “Students want to know more about what they are eating,” said DiStefano.

A shift away from meat

Protein is a buzzword for college athletes, but more students are looking for sustainable sources of protein. Over 35 percent of students say they eat less beef since attending UMass and 94 percent say they want to eat more fruits and vegetables. There has also been a 2 percent increase in students who identify themselves as vegetarian. Could that be having an effect on grades?

“This spring, we wanted to ask a few more questions in our annual student survey on consumption behaviors. We wanted to dig a little deeper into what we could learn about the relationship between foods and other outcomes,” said DiStefano. “We found that female vegetarians had the highest GPA, while male omnivores had the lowest GPA. We don’t know if there’s a connection, but as a university we have the opportunity to look at this information from a number of different perspectives.” 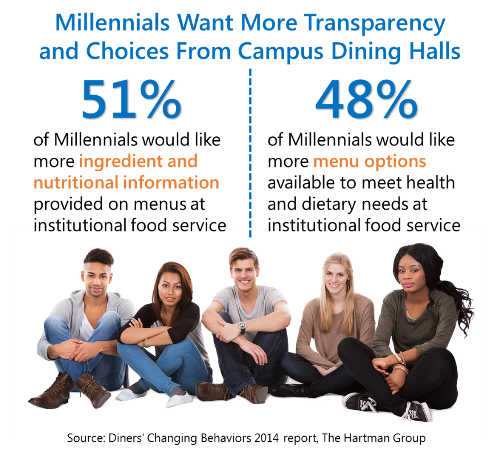 The survey also found that students who dined most frequently at UMass’s recently redesigned Hampshire dining hall experienced benefits beyond the palate. “Students who ate at Hampshire reported feeling less anxious and more satisfied with themselves than students who ate most frequently at other dining halls,” said DiStefano. The finding is particularly interesting in light of increased attention to how anxiety can negatively affect college students. Nearly one in six college students has been diagnosed or treated by a professional for anxiety in the last six months, according to the annual national survey by the American College Health Association.

At Hampshire, an oval-shaped serving area reduces lines and wait times and encourages frequent trips and smaller plates rather than the one-time load-up found in traditional college cafeterias. DiStefano has noticed a trend toward eating smaller meals more frequently, many of them eaten on the go.

“Students are gravitating to smaller meals,” said DiStefano. “By promoting a ‘small plate, big flavor’ message we are helping to educate them on what a portion size looks like.” The move to smaller plates and away from using trays in the cafeteria has also helped to reduce waste at UMass. “Modeling serving sizes helps students understand that their ‘normal’ may actually be overeating. We can help them understand that feeling full can be accomplished with plant-based proteins that are healthier for them,” he said.

Students want food they can customize, but they also want it available to go. “Students don’t want to be held hostage to mealtimes. They want to grab and go, so we offer more handheld options that have a good nutritional profile, so instead of pizza, we’ll offer sushi,” he said. Smoothies supplemented with kale, flaxseed, avocado and fresh fruit are also a popular option for UMass students to get a nutritional boost on the go. At UMass, smoothies are served in 4-ounce sizes.

DiStefano said a key area of future interest at UMass Dining is how ingredients could affect performance. “Studies have long shown that eating breakfast can affect academic performance. We’re now interested in how specific ingredients may further affect performance,” he said. “Can consuming a diet rich in ginger, turmeric, celery or flaxseed, for example, affect how well someone does on a test?”