Revisiting the Diversity of American Foodways

The history of race in America is fraught with injustice. In this environment, it is critical to approach diversity with an abundance of both caution and respect.

We are experiencing a moment of reckoning today around identity and who has the right to profit from the innovations of historically marginalized groups. How we understand diversity in the U.S. has evolved due to both changing patterns of immigration and changing definitions of race and ethnicity, with ramifications for our food and beverage culture.

Race has long been central to U.S. population measurements, stemming from our history of slavery. This history continues to influence how we relate to each other as individuals and groups, from the personal to the political level.

Census definitions and options (such as, since 2000, being able to select more than one race) play a critical role in our understandings of diversity in the U.S. Currently, 1 in 4 U.S. residents is either a 1st- or 2nd-generation immigrant; that is, either born elsewhere or with at least one parent born elsewhere. The majority of both Hispanic and Asian consumers are 1st- or 2nd-generation immigrants.

The meanings of race and ethnicity are constantly in flux, changing across countries and time periods, and often overlap with many other elements, such as language, national origin, and cultural background. Already complex, race and ethnicity also capture only a portion of a person’s self-identity that may include aspects of religion, gender, sexual orientation, where one lives, and education level, all of which can potentially impact consumers’ attitudes and behaviors. 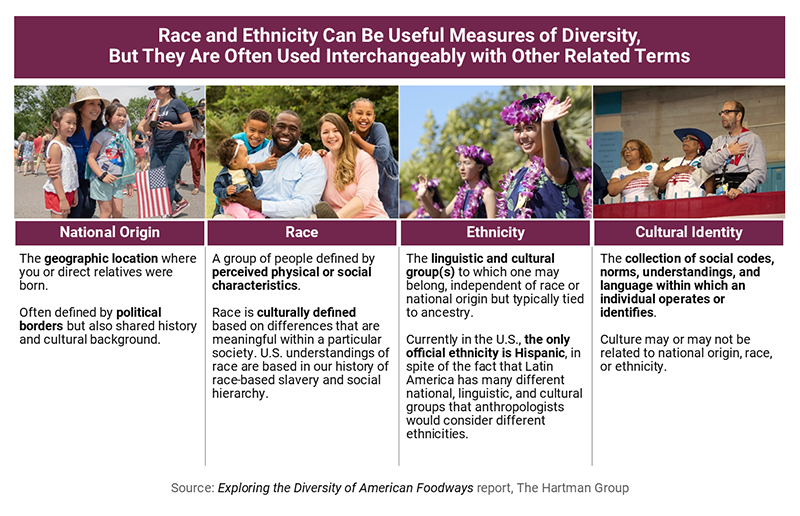 Despite growing diversity in the U.S., White, European-descended Americans still represent a significant majority. As such, what is broadly described as “mainstream” American culture often closely resembles the attitudes, traditions, and history of White Americans.

While White consumers often feel less connected to their racial, ethnic, or cultural background, it is important to remember that they do not have “less culture” than other groups. Rather, their culture is what is perceived to be “normal.” Place a White American in a different national setting, like Ireland, and they would soon perceive themselves to be culturally American, even if their ancestors were Irish.

While American food is not one cuisine, there are central food values — convenience, choice, and incorporation — that are firmly entrenched in American culture more broadly and tend to shape consumers’ basic routines and habits regardless of background.

The core values of convenience, choice, and incorporation serve as the foundation for similar routines and habits across American consumers generally, establishing the guardrails and guiding patterns for everyday eating.

The values of choice and incorporating American abundance mean there isn’t one dominant American cuisine. However, there are five cuisines that consumers tend to eat most often: American short order/fast food, Western European (especially Italian), Mexican, Chinese, and soul food/Southern. These cuisines reflect long-established communities and past immigration patterns.

The past several decades have seen large shifts in the racial and ethnic diversity of the United States, much of it driven by increased levels of immigration, particularly from Latin America and Asia. Food trends in the 21st century reflect this diversity: the desire for authentic global and regional flavors, fusion cuisines, health and wellness remedies from global traditional medicine, the trend toward plant-based, and an interest in heritage ingredients.

Food is central to how consumers feel linked to both past and future, and it is one of the primary ways that those who feel some connection to their cultural heritage maintain that connection. However, building a business strategy that is steeped in and caters to a diverse consumer base requires respect and an understanding of how consumers identify with, understand, and celebrate their backgrounds.

Consumers will support companies that are cognizant of the political and cultural climate and treat communities of color with respect. The opportunity for those that can effectively and authentically leverage diversity can be large.

As the U.S. grows ever more diverse, it has never been more important to understand how changing demographics affect our food culture — and your business. Learn about The Hartman Group’s Exploring the Diversity of American Foodways report through this link or by contacting us: blaine@hartman-group.com