How America Eats 2020: United in How We Eat, Diverse in What We Eat

Among diverse ethnicities and immigration history, consumers tend to behave similarly around cost, convenience, and snacking but have larger differences in mealtime habits and nutrition. 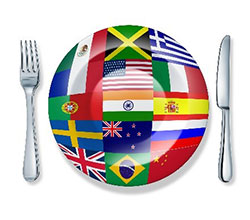 Though always a diverse nation of immigrants, the U.S. is growing more diverse in terms of race and ethnicity, with almost half of Gen Z identifying as a race or ethnicity besides White alone. In addition, the percentage of the population represented by recent immigrants in the U.S. is near the record level set in the late 19th century, and 1 in 4 U.S. residents is either a first- or second-generation immigrant — meaning that either they or at least one parent was born elsewhere.

The Hartman Group’s Exploring the Diversity of American Foodways report finds that while many consumers have similar ways in which they eat, their cultural background has an impact on what they eat (in terms of flavors and actual dishes), and food is an important way that people maintain a connection to their cultural background. While recent immigrants are varied in what they eat (both from the general population and from each other, depending on their national origin), they appear to quickly adopt American food values in how they eat.

• At a very high level, recent immigrants are quite similar to the general population in their basic approaches to eating, including a preference for quick and easy convenience, frequent snacking, and choosing from a wide variety of cuisines based on occasion.

• Food plays an important role in helping recent immigrants feel connected to their cultural background, and as a group, they tend to be more engaged with cooking. They believe they spend more time cooking than the average American, using more fresh foods and produce, and have healthier, higher-quality diets. 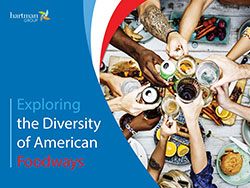 most likely to eat foods associated with their culture on a more regular basis, but everyone eats traditional food on holidays and special occasions.

Consumers tend to behave similarly around cost/convenience and snacking but have larger differences among ethnicities in mealtime habits and nutrition. At a high level (see chart below), Asian and White consumers show similarities in prioritizing convenience but also nutrition, scratch cooking, and social meals. Their general socioeconomic similarities may contribute to this pattern. Statistically more likely to live alone, African Americans are less likely than other groups to eat meals together with others and less likely to have home-cooked meals, perhaps pointing to a distinct challenge or unmet need. 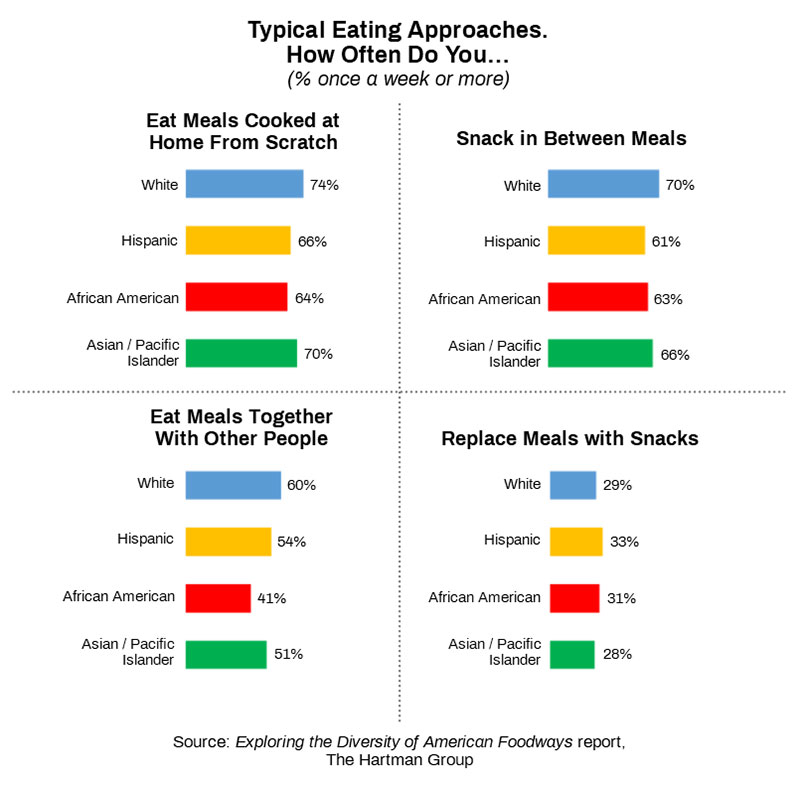 Everyday foods have more freedom to be playful and experimental. For instance, fusion cuisines can be a fun way for consumers to engage with their traditional foods in more contemporary ways, especially when those who are “playing” with tradition are considered legitimate and respectful stakeholders.

In practice, everyday cooking and eating are very flexible, while the most traditional foods are often reserved for special occasions. When it comes to more frequent, less traditional eating behaviors like snacking, snacks allow tradition to come into everyday eating quickly and easily. Snacks offer moments of delight that can be created either through nostalgia of past foods or discovery of new flavors.

Due to food’s role in how consumers connect to their identity and learn about other cultures, global flavors are a large market opportunity.

Not only is the U.S. population more diverse than ever before, it is also more globally connected. The result is that learning about and exploring both one’s own background and those of others has become a value in and of itself, especially in food.

Brands that are able to tap into this desire for exploration in ways that satisfy American food values and feel like authentic cultural sharing can reap the rewards: as examples, Saffron Road makes meals, snacks, and sauces that are halal-certified, spanning a variety of global cuisines, and Brazi Bites has introduced a classic Brazilian snack to the frozen food aisle.