Beverage as Snack: The Expanding Role of Beverages in Everyday Life

The Beverage Landscape Continues to Evolve in Step With Changing Consumer Needs. 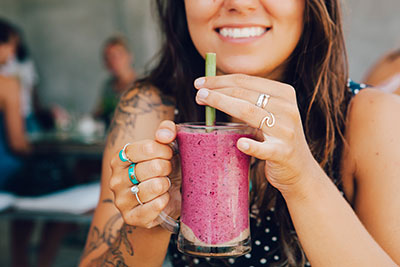 Consumer expectations for beverages to “do more” — in terms of efficacy, functionality and requirements for satisfaction of needs on diverse occasions — have been increasing in complexity for years: While having a cold one has always been about simple satisfaction of the need to hydrate, take a break or socialize, the combination of relaxed cultural norms around drinking behavior and the increased importance of health and wellness in our food and beverage choices has expanded the roles that beverages play in our everyday lives.

On par with the growing complexity of beverage types and occasions, snacks and snacking occasions (often undertaken with a beverage at hand) are also ubiquitous, growing in popularity and comprising 48% of all eating occasions. Of interest, the two worlds (beverages and snacks) often collide such that we can easily imagine occasions where a beverage might become either a snack (e.g., coffee as an energizing break in the day, alcohol consumed as an indulgence late at night, etc.) or may even viewed as a replacement to a meal.

As with the ubiquity of snacks and snacking, our Modern Beverage Culture report helped document how we've become constant sippers and found that 65% of consumers said they always have a beverage on hand (including 73% of Millennials, 63% of Gen X and 58% of Boomers). The report also documented the fact that beverages prior to the pandemic had become increasingly socially acceptable in almost all spaces of our lives (from work to school to car, bus, or train to shops and public spaces) and were increasingly used as a source of nutrition and even as substitutes for food: At the time of the report, 62% of consumers believed that beverages played an important role in their health and wellness, and the younger the consumer, the stronger the belief. Forty-four percent of all consumers agreed with the statement “I like my beverages to do something for me, such as provide energy, nutrients or other benefits.”

Some of the emphasis on replacing food with beverages is historic, harkening back to the days when old-school meal replacement shakes like SlimFast were designed to work in the context of a restricted calorie diet (tiding you over until you could eat a “sensible dinner”). Today's meal replacement drinks are positioned nutritionally to be food and focus on the benefits of not skipping calories but instead skipping the time and energy it takes to make and eat a meal.

Other changes in beverage consumption behavior reflect how the landscape of beverage needs and behaviors evolves as new attitudes develop about how beverages can serve health and wellness needs and cultural values in the context of convenience and choice.

The modern beverage landscape is the result of a highly responsive marketplace adapting to these changed attitudes and in turn is being shaped by them. As the following illustration depicts, these influences have formed a feedback loop, causing marketplace change that includes a decline in consumption of traditional drinks (like dairy, juice and soda) while upstart categories (including functional beverages and RTDs) seize share. 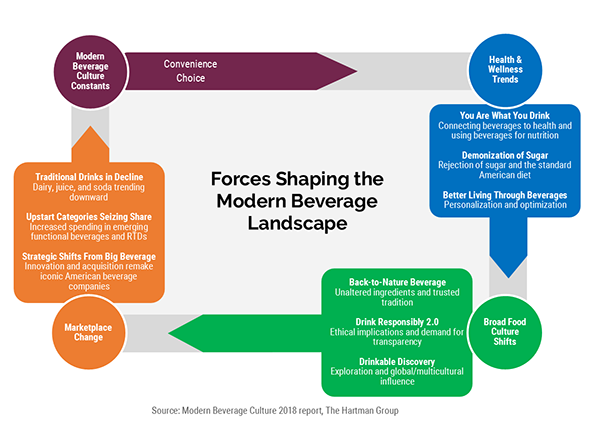 Our Functional Food & Beverage and Supplements report reflects changing consumer views on what beverages can do for them, and we see consumers saying they think of a broad range of beverages as potential vehicles for delivering enhanced functionality in their diet. For example, as portrayed in the following infographic, 33% of consumers say they currently consume smoothies for some type of functionality and another 47% say they are interested in trying them. Similarly, 25% say they consume fermented beverages like kombucha or kefir for functional benefits and another 29% say they are interested in trying those. Overall, more than half (56%) of adult consumers say they consume functional beverages to treat or prevent a specific health condition. 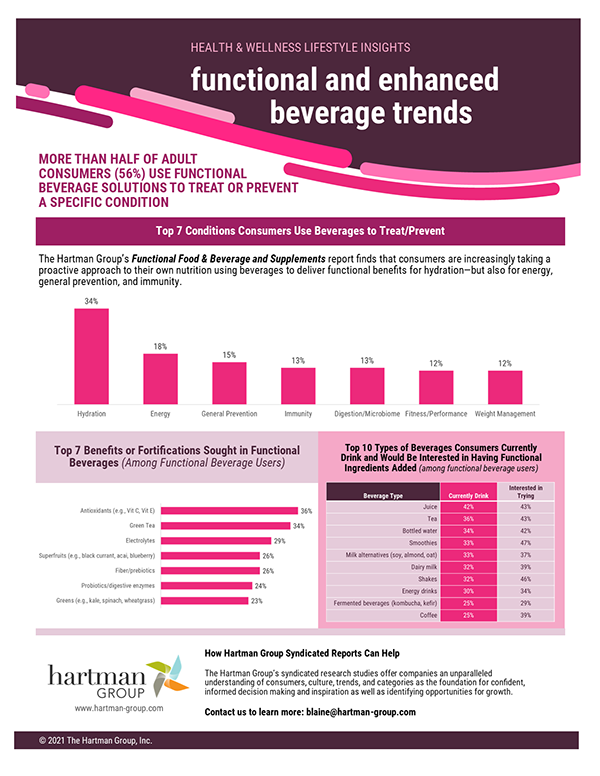 When it comes to nutrition for children and reflective of the “beverage as snack” trend, parents also bring their desire for personalized nutrition and functionality to their children’s beverage choices. Beverages can provide an easier way to give children — especially picky eaters — the nutrition parents worry their kids’ diets lack. Smoothies are the perfect, personalized vehicle for this purpose. Fruits, vegetables, protein, fiber, vitamins, and minerals are all easy additions to smoothies that parents tailor to everything from weight gain to energy to tummy troubles to general good health. Millennial parents (who represent the majority of parents of young children) bring their generation’s distinct notions around quality, wellness, and personalized nutrition to their approach to childrearing and are making the universe of claims around the formerly simple category of dairy substantially more complex.

Meanwhile, consumers are using fermented and broth beverages and functional beverages/waters in the midday and afternoon period when they have traditionally turned to water, tea, sports/energy drinks, and soda. Drinks like kombucha, coconut water, and plant-based/vitamin waters offer a highly appealing combination of refreshment and health benefits.

Stay on top of the evolving marketplace with insights and analysis from the food and beverage industry’s leading authority on consumer culture and behaviors, The Hartman Group. Learn more about our report, Functional Food & Beverage and Supplements.