From Lab-Grown Meat to Insects: Are Consumers Ready to Rethink Protein? 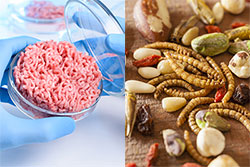 Scientific advancements in startups and laboratories are enabling innovation and disruption throughout the food and beverage industry. In the protein category, the quest to develop alternative proteins is being undertaken under the guise of sustainability (as an effort to combat global greenhouse gases or the effects of factory farming) or under the rubric of health and wellness (to assist consumers in their goals to eat more healthfully both for themselves and the planet). A wide range of protein possibilities are emerging, including those in the increasingly popular plant-based category but also those that are genetically modified, derived from cell-cultured meats, or derived from insects.

To see what consumers are thinking about emerging protein concepts we examined the topic in our Food and Technology 2019 report, which analyzes their reactions to four protein concepts including: AquAdvantage salmon (genetically modified, faster-growing salmon), cellular dairy (milk made without cows, via fermentation), cellular meat (meat made without animals, grown in a lab) and cricket protein (snacks made with insect protein).

Overall, we found that consumers had strong reactions to these innovative proteins, with few expressing neutral opinions. In fact, how consumers think about innovative foods is influenced by whether they think of them first and foremost as an innovation of the factory, the field, the laboratory, or the kitchen, each carrying its own set of meanings and connotations (Figure 1). 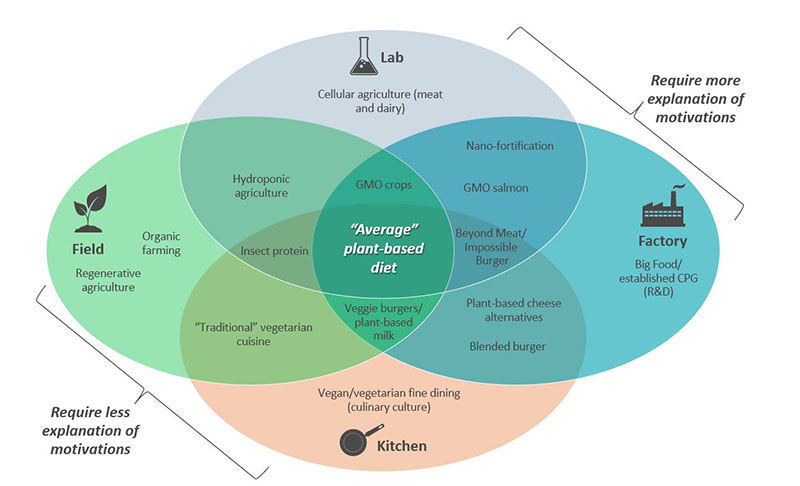 Field and kitchen food innovations tend to be the least problematic, followed by those relating to factory and laboratory settings. Lab-based innovations tend to be associated with the most profound and challenging food changes. Even though disruptive innovations like cellular and insect proteins appear to be logical extensions of consumers’ desire for ethical, healthy, and tasty protein products, consumers see little overlap between these ideas and the current world of meat or dairy alternatives.

When judging food innovations like these protein concepts, consumers tend to assess the acceptability of scientific and technological innovations on a case-by-case basis, weighing up not just “rational” risks and benefits but more culturally driven criteria like the motivations of the producer, the level of transparency they demonstrate, the amount of control they feel they have over the product, and ultimately, how tolerable it feels: does it just cross too many lines and enter the territory of fear or even disgust?

As it turns out, “lack of disgust” was the best predictor of appeal for the protein concepts we tested. As a result, AquAdvantage salmon was the most appealing concept overall, despite the fact that some consumers felt strongly that this concept crossed ethical lines into “playing God” because of connections to genetic engineering. Similarly, despite the fact that consumers often didn’t see many “real” problems with insect protein, this concept clearly revolted many consumers, overriding all other considerations. Notably, those consumers that purchase plant-based proteins or are early adopters of food and technology innovations were more likely to see the personal, ethical, and environmental benefits of innovative protein concepts. Because these values already motivate them, consumers already buying plant-based proteins appear more willing to consider these innovations, even if it means talking themselves out of a negative, knee-jerk emotional reaction.

Some of the specifics of consumer reactions to each innovative protein concept include:

• AquAdvantage salmon (genetically modified, faster-growing salmon): Consumers generally share similar opinions on GMO salmon – it might be better ethically, but they want to know more about taste and health and wellness first. While not top of mind, concerns include unknown risks to human and environmental health and additionally concerns for animal welfare.

• Cellular dairy (milk made without cows, via fermentation): Cellular dairy is conceptually challenging for consumers, and many – especially users of alternative milks – struggle to see the point of it. At the same time, tech-forward consumers are more positive about cellular dairy and have more faith in its health and wellness and ethical benefits.

• Cellular meat (meat made without animals, grown in a lab): Like cellular dairy, cellular meat is also a conceptual challenge, but the problem it aims to solve is easier to grasp; however, many consumers are unwilling to be part of that solution. Nevertheless, tech-forward consumers are more positive about lab-grown meat as are consumers who already buy plant-based proteins, despite lower levels of understanding.

• Cricket protein (snacks made with insect protein): For most consumers, eating insects has a high disgust factor and is viewed as simply taboo because insects are associated with contamination, even if consumers rationally know better. Culture-based aversion to eating insects is still strong in the U.S. and for many consumers, the idea of “eating bugs” conjures up apocalyptic imagery.

Going forward, U.S. food culture is becoming increasingly focused on incorporating culinary diversity, trying ways of eating that move beyond the standard tropes of the American diet (e.g., meat, starch, and a vegetable). This is driving them to seek out new ways to eat, including beyond meat and dairy. However, they also want to achieve diversity without going too far outside of their comfort zone, skill set, or ability to prioritize time for food preparation.

New protein sources are likely to become increasingly important as more consumers make a conscious decision to eat less meat. Rather than turning to vegetarianism or veganism, increasingly more consumers — particularly Millennials and Gen Z — are adopting a more “flexitarian” lifestyle by limiting the amount of meat they consume for a variety of reasons, including animal welfare, sustainability, and health and wellness. Younger consumers are also more open to innovations in both food and technology, suggesting a future population more open to innovative food products.

Consumers will continue to see the replacement of animal products in the American diet as a worthy reason to innovate. While meat consumption continues to rise, both meat and dairy are facing real challenges in consumer perception, notably in the realm of animal welfare. At present, concerns around their healthfulness and sustainability are showing no signs of abating. Consumers generally accept that this is a problem that needs a solution.

As to the proteins described here, consumers see clear limits on how much science and technology should be allowed to change a food from its “natural” state. However, they will tolerate intervention when there are clear benefits to the product, when the motivation of the producer is perceived to be pure, and when the need for a solution is proportionate to the methods used as long as the resulting product is not perceived too negatively.