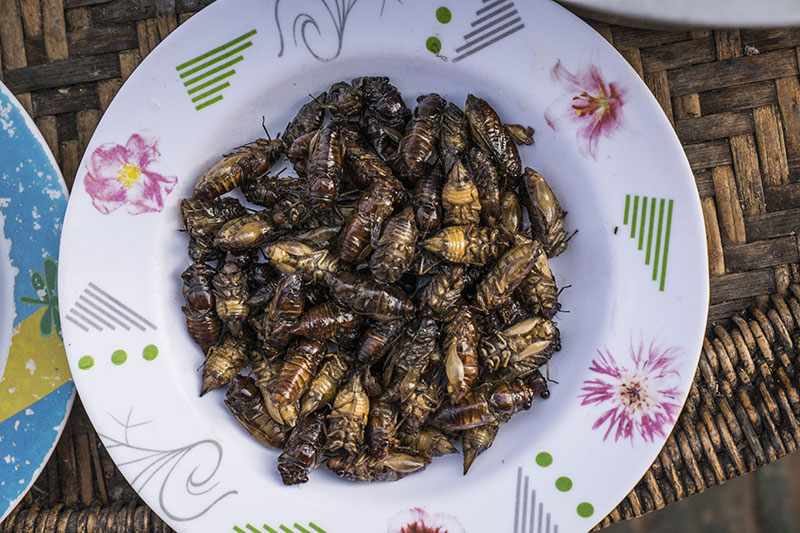 An article in WIRED describes how, along the eastern U.S., from Georgia to New York, cicadas from the largest North American “Brood X” are starting to hatch, after gestating underground for 17 years. The piece describes how the phenomenon has led to a number of local food columns and recipes for preparing the insects.

Area chefs such as those profiled by WIRED—Connecticut-based sushi chef Bun Lai and New York-based Joseph Yoon—have been vocal supporters for consuming cicadas, which are discussed as a sustainable, protein-rich food that advocates claim is one of the best-tasting insects, with a flavor similar to shrimp.

As noted in the article, according to entomologist Jessica Ware, insect farming carries a significantly lower carbon footprint than animal sources of protein, requires much less land and energy, and is seen by experts as one possible solution in solving for food insecurity.

Cicada eating will appeal only to a limited subset of consumers willing to catch, prepare, and consume the insect, and yet the cyclical phenomenon comes at a time when more consumers are becoming interested in the nutrient-dense and ecologically friendly aspects of entomophagy—or eating bugs.

WIRED reports predictions that the value of the global edible insect market will reach $4.63 billion by 2027, with the North American market the fastest-growing sector.

We’ve been examining the topic of insects as an alternative and sustainable source of protein for some time: For example, our Food & Technology: From Plant-Based to Lab-Grown report found that 27% of consumers were interested (as of 2019) in purchasing insect protein, and an additional 11% were open to doing so.

While a large number of consumers are still wary or disgusted by the idea, the number of culinary articles about cicadas appearing at this moment in the U.S. points to a broadening cultural curiosity and general interest trending upward in insects as a protein source. This interest, led by innovative chefs and trend-forward consumers, has been hastened by a recognition of the need to combat climate change in step with a search for protein alternatives.

Article: From Lab-Grown Meat to Insects: Are Consumers Ready to Rethink Protein?