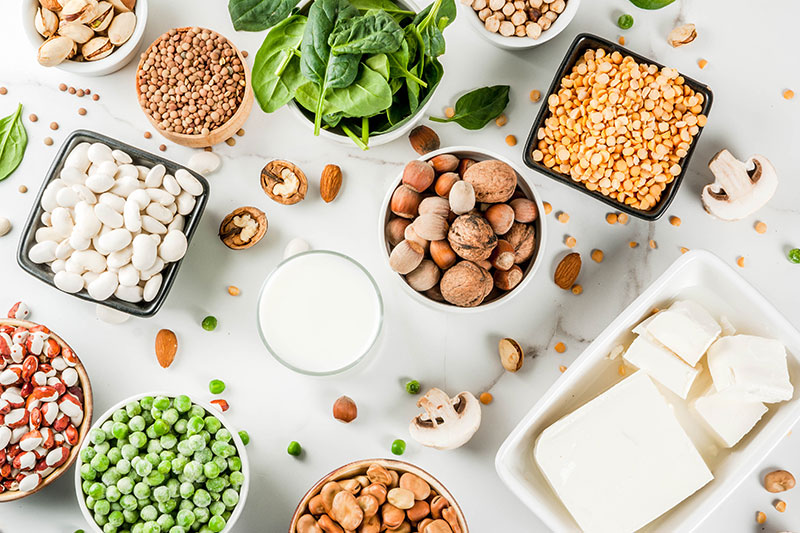 Consumers continue to experiment with various approaches to eating — our Health + Wellness 2019: From Moderation to Mindfulness report finds half of all Americans have tried an alternative eating approach over the past year, reflecting increased efforts to seek personalized diets that make them feel better in body, mind, and soul. The prescriptive rules and guidelines of vegetarianism and veganism — both common aspirations — can appeal to those who may worry about whether they are “eating right” in terms of health, ethics, or both.

Veganism as an aspiration is an interesting and impactful health and wellness trend that is heading mainstream. Health + Wellness 2019 reports that 9% of consumers say they've tried eating vegetarian and 6% of consumers say they've tried a vegan diet in the past year. While most consumers continue to eat meat (which is underscored by sales data showing increasing consumption of animal proteins), the frequency with which we hear of interest in vegetarianism and veganism as aspirational diets points to something else going on: There is a sense — widespread among consumers, we believe — that few, if any, animal products are healthy. And because vegetables are, conversely, the healthiest thing, eating vegetarian (and veganism, moreover) “must be the healthiest” of diets.

In practice, experimenting with eating vegetarian or vegan makes engaged and (typically) younger consumers much more open than older consumers to meat and dairy alternative proteins. It also means younger consumers experiment at higher rates with vegetarianism and veganism. Looking to the future, this might mean a long-term decline in meat and dairy consumption as more consumers discover the range of possibilities beyond meat — or maybe not: Of interest, our Food & Technology 2019: From Plant-Based to Lab-Grown report shows that only 6% of plant-based purchasers are vegan/vegetarian, while 41% of purchasers describe themselves as “omnivores.” Certainly, the aspiration to look beyond traditional proteins and fats exists for personal health reasons and is shored up by a range of emotional and ethical pillars (animal welfare, sustainability, social justice) that will likely give eating vegetarian and vegan lasting power as trends.

To respond to the interest in eating vegetarian and vegan, there is a growing list of CPG companies that are developing investment arms and incubators that take a stake in rapidly developing brands and technologies within the lab-grown and meat alternative space. Several tech-driven, meat analogue startups are still in R&D/conceptual stages, and they are positioning themselves as animal-free gateway foods for carnivores. The success of these companies in the future will not be dependent on an increase in vegan or vegetarian eating but rather will be determined by how much acceptance the current flexitarian trend in eating finds sustained traction as a mainstream part of U.S. food culture.
Further reading: